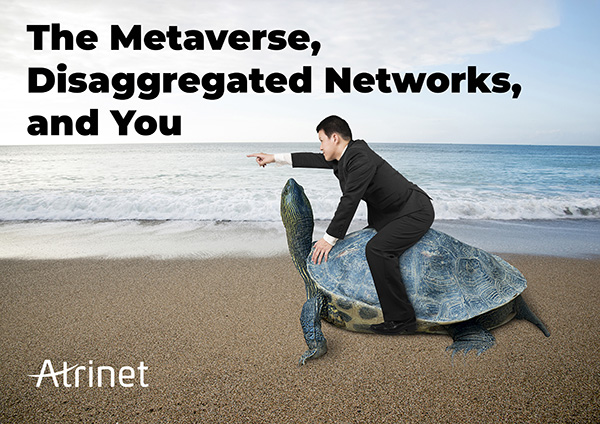 Metaverse, Disaggregated Networks, and You

The Metaverse is a hot topic at dinner tables around the world, offering a fully virtualized world (yes! your dream of riding a giant turtle can finally come true), connecting people from around the globe.  But can it really be supported by your ISP?

Described by Gartner as the ”Next Version of the Internet”,  the Term ‘Metaverse’ was coined by Neal Stephenson, a science fiction author, back In 1992.  It described a virtual reality world to which people would escape to, and our Metaverse is not that different. Although there are some projects (like Decentraland) that show the beginning of building this virtual second world, we are still years behind a fully functional one.

The Scope of Things

A recent Gartner report says that 25% of internet users will spend at least an hour every day in the metaverse by 2026. This includes work, entertainment, and shopping – supported by Blockchains and NFTs for a full Virtual economy.
This would be yet another Bandwidth Guzzling Monster roaming our ever-so-crowded networks.
Firstly, Networks are already Over-Subscribed, and speed varies depending on the number of users. Second, broadband speeds are not symmetrical – Upload speeds are a fraction of the download speed. In the past, that wasn’t a big issue (streaming content in, rather than out), but the recent pandemic changed how we used the web.  As we pace into the new era of internet, hybrid working, video conferences, and more – sending data is as common as receiving it.
Although this problem was mostly stabilized, the Metaverse will be a mammoth in this space.

While operating costs are high due to the constant evolution of technology, revenue per user remains the same. Where would the funding for new infrastructure come from?

Disaggregation to the Rescue

Disaggregation is the practice of deploying network hardware separately from the software.
Instead of being ’locked-in’ to a single HW Vendor and its proprietary Software, Telcos are now free from that vicious cycle of slow and expensive HW replacement.
As much cheaper networking chips and switches are now available (Merchant Silicon, a topic for next time) and for a fraction of the price, the Software world is quickly catching up – like our very own NetACE– and can help you deploy a full operating network using Zero-Touch Provisioning – In a matter of minutes(!).
Using NetACE, Telcos can now work on a unified UI & APIs, controlling and connecting between all Multi-Vendor, Multi-Technology, Legacy, and Disaggregated Networks (with full FCAPS support).
Moreover – Upgrading any part of the network (HW or SW) can be done in minutes – without throwing away existing infrastructure.

As the internet grows and consumers demand more, operators are bound to reinvent themselves and invest in the right management systems for their networks. Changing the way they design and look at networks.

And YOU?
You just wanted to ride a turtle into the sunset on your private island…I can get that…